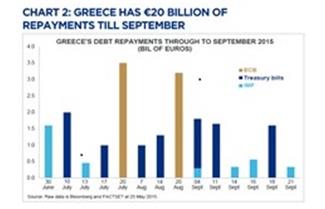 Greece appears to be on the precipice of failing. Matt Sherwood, Perpetual's Head oInvestment STrategy, Mult Assets, concludes that with a referendum to be held about any balout deal after a rescheduled debt repayment to the IMF is due, Greece has lttle prospect of fully meeting its obligations to its debtors, public servants and pensioners in coming months.